In the Town of Hempstead, shellfish are an important part of our maritime tradition and culture.  First harvested by the Rockaway and Merrick tribes and later by Dutch and English settlers, shellfish are still harvested and enjoyed by Town residents today.   Each year, in the Town of Hempstead over 1,200 residents purchase recreational and commercial harvest licenses and enjoy spending a part of their summer digging for clams at their favorite mud flat at low tide.  As reported by New York State Department of Environmental Conservation, the Long Island region shellfish harvest directly contributes over $10 Million in annual reported revenue to our local economy.  According to Seafood Health Facts, shellfish such as clams and oysters are a low fat, high protein seafood choice with an above average amount of healthful minerals.  In addition to the income, food, and fun they provide to many Long Islanders, there is a growing recognition of the wider ecosystem benefits that these bivalves provide to our coastal waters.   These ecosystem services include carbon sequestration, nutrient remediation, coastal defense and the benefit of additional habitat complexity provided by clam beds and oyster reefs.  Of significant importance is the tremendous ability of shellfish to naturally filter our local waterways.  One adult clam is capable of filtering up to twenty gallons of seawater per day.  Adult oysters can filter more than twice as much as clams, up to 50 gallons of seawater per day.

The Town of Hempstead’s shellfish restoration program began with the construction of its first clam nursery in 1983.  The seeding program was established by the Town after observing a 95% loss of the clam population in just one year.  The sudden population loss was the result of over harvesting after the recent reopening of harvest areas in the East Bay and Middle Bay.

Recognizing the significant loss to the fishery and the natural water filtration capacity of the estuary, the restoration of shellfish resources in Hempstead Bay became a major priority and the program has been steadily expanded over the past 30+ years.  Originally juvenile clams were purchased from regional hatcheries, grown to seedling size in the nursery, and planted in the clam beds and sanctuary areas of Hempstead Bay  The first axial flow floating upweller system (FLUPSY) was installed in 1994 increasing capacity to 1 million juvenile clams per year.  Additional energy efficiency and shellfish production capacity upgrades were made in 2007 with funding from New York State Energy and Research Authority.  This included relocating the nursery facility to its current pier location over the marina reducing energy demand for pumping water.  A battery backup system charged by onsite solar and wind energy provided off grid capabilities.  A 40’ paddle wheel FLUPSY was also installed further increasing production capacity to 3 million clams per year.

With additional grant funds from the New York State Department of Environmental Conservation and New York State Department of State, the Town’s aquaculture facility has grown to include eastern oyster and sugar kelp production.  A new continuous algae production system, expanded larvae rearing tank room, and the addition of five axial flow FLUPSYs have significantly increased the capacity and capabilities of the shellfish program. 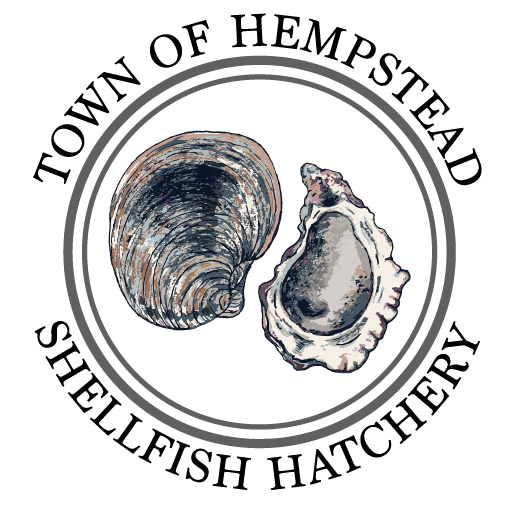