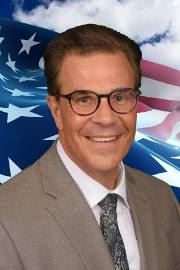 Tom Muscarella, of Garden City, represents the Second Councilmanic District bringing a wealth of local business experience and outstanding community involvement to Hempstead Town. Councilman Muscarella has been in the insurance business for 40 years and is currently a sales executive at Assured Partners Northeast LLC. Prior to this position, Councilman Muscarella was the owner/partner of Archer A. Associates Insurance Agency in Franklin Square.

Having grown up in Elmont, Councilman Muscarella has been actively involved in community organizations throughout the district for decades. He has been a member of the Sons of Italy American Lodge since 1978, served as Elmont Little League Manager from 1990 to 1994, was Garden City Little League Manager from 2000 to 2010, is a Past Grand Knight of Franklin Square Twelve Apostles Council of the Knights of Columbus and has been president of the Franklin Square Lions Club since 2001. He is also a proud member of St. Anne's Church.

His extensive volunteer work has earned him the title of Grand Marshal of the Franklin Square Memorial Day Parade and Franklin Square Historical Society Citizen of the Year in 2013.

Councilman Muscarella is a graduate of St. John's University. He and his wife have two children.