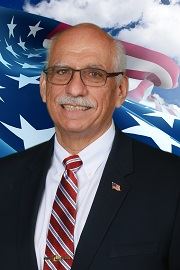 Representing the Sixth Councilmanic District, Dennis Dunne, Sr, was re-elected to his position in November 2021, continuing his dynamic career in public service. Councilman Dunne was previously appointed to the Hempstead Town Board in June 2017 after serving 22 years as a Nassau County Legislator where he was an original member when it was formed in 1996. As a Nassau County Legislator in the 15th Legislative District, Dunne previously represented the communities of Levittown, Westbury, and portions of East Meadow, Bethpage, Wantagh and Seaford. He continues to lend his wealth of knowledge with over 25 years of experience of serving the community.

In addition to his “call of duty” serving our residents in local government, Councilman Dunne is a proud veteran of the United States Marine Corps who served in the Vietnam War. He has been at the forefront of advocating for our veterans and as a Vietnam Veteran Councilman Dunne knows what it is like to come home after service and the importance of supporting our veterans. He was instrumental in sponsoring legislation to create a permanent property tax exemption for Cold War-era veterans providing for up to a 15 percent reduction for eligible recipients. New York State law had limited the Cold War Veteran Exemption to 10 years, until the former Governor signed legislation authorizing local jurisdiction to grant the exemption permanently as long as the veteran or the unremarried surviving spouse remains a homeowner. At the time, there were 1,500 recipients of the Cold War Veterans Exemption in America’s largest township.

Councilman Dunne has been an ardent supporter of keeping our children safe. Accordingly, he has sponsored several pieces of legislation aimed towards restricting vaping and vape products. Specifically, Dunne proposed legislation requiring signage at businesses that sell vape products in an effort to alert consumers that these products contain dangerous chemicals. The goal of the signage was for children to see, in black and white, that these products are dangerous to their health, and they will then think twice about purchasing them. In addition, Dunne proposed legislation in the Town of Hempstead prohibiting the sale of flavored e-liquid nicotine products used in e-cigarettes. After hearing disturbing reports of young people and teenagers being hospitalized with severe respiratory illnesses due to vaping, Councilman Dunne took action to immediately protect their health from the numerous and unknown dangers associated with vaping.

As a former wrestler, lacrosse and football player, Councilman Dunne understands the importance of keeping our youth healthy, active and involved in school activities. He was inducted into the National Wrestling Hall of Fame in 2017 and the Levittown Alumni Hall of Fame for 2017-2018. He enjoys attending local High School sporting games and matches, enthusiastically cheering for all players in his district. He works closely with organizations in his district, including YES Community Counseling Center and the East Meadow Council Coalition to encourage mental health awareness.

Councilman Dunne serves as President of the Levittown/Island Trees Veterans Council and was the President of the Marine Corps Coordinating Council. He is a member of the American Legion, the V.F.W., the Disabled American Veterans, the Ancient Order of the Hibernians, the Lions Club, the Knights of Columbus, the Kiwanis Club, and the Levittown Chamber of Commerce. He is a former Chair of the Nassau County Executive’s Veterans Advisory Committee. Councilman Dunne served as Co-Chair for the 40th and 50thAnniversaries of Levittown, and was active in organizing the 60th and 70th anniversary celebrations. He is also the former Director of the Nassau County Veterans Agency.

Councilman Dunne received his Associates of Art degree from Nassau Community College in 1975 and his Bachelor of Arts degree from Hofstra University in 1979.  A lifelong resident of Levittown, Councilman Dunne has two children, Dennis Jr. and Joleene, and five grandchildren.

Councilman Dunne represents the residents of the Sixth Councilmanic District of the Town of Hempstead which includes Levittown and portions of Bellmore, Bethpage, East Meadow, Merrick, Seaford and Wantagh.