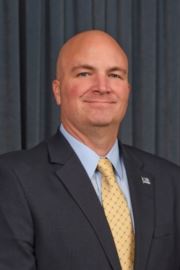 Christopher Carini was elected to represent the 5th District in November 2019. He has been a resident of Seaford since 2005 and is extremely active in the local community.

A proud member of law enforcement, Councilman Carini recently retired after serving twenty-two years as a Police Officer in the New York City Police Department, MTA Police Department and Port Authority of New York, and New Jersey Police Department. Making hundreds of arrests and assisting on investigations, Carini brings out-of-the-box thinking to the government. As an Executive Board member of the Port Authority Police Benevolent Association Inc., Carini represented 1,800 police officers, becoming an expert on labor relations, contract negotiations and the ability to represent the workforce. Councilman Carini served on the PBA's Budget, Bylaw, Election and Legislative committees and was a Trustee on both the PBA's Welfare Fund and Widow and Children's Fund. As a member of the PBA's legislative committee, he often went to Albany to advocate for the membership which has given him invaluable insight on the legislative process.

Councilman Carini boasts more than a decade of community involvement including serving as Vice President of the Wantagh-Seaford Homeowners' Association (WSHA) and Director of the Wantagh-Seaford Homeowners' Neighborhood Watch Committee. He created a monthly pothole list for the homeowner's association and worked with various jurisdictions to have them fixed. In addition, he has also alerted the local municipalities about any needed park repairs, graffiti, litter, and other quality of life issues. He also made sure neighbors were kept informed about zoning projects proposed for the area that might impact residents. In 2012, he was part of the WSHA's Super Storm Sandy forum that provided hundreds of residents the opportunity to meet with agencies, including the federal government, state, county, and town as well as support agencies that could assist them as they struggled in the aftermath of the storm.

Carini proudly represents the 19th Legislative District as Vice Chairman of Police Commissioner Patrick Ryder's Community Council. He has developed relationships with the Nassau County Police Department that have enabled him to work directly with them on issues that impact the community.

Carini is a regular at the Seaford Board of Education meetings and served on the District's Security Guard Advisory as well as the District-Wide Safety Committee, using his expertise from his years in law enforcement to make schools safer for the children.

Councilman Carini is focused on ensuring an honest government that holds the line on taxes while investing in our roadways as well as improving the quality of life for residents.

Chris and his wife Danielle are the proud parents of two young children.